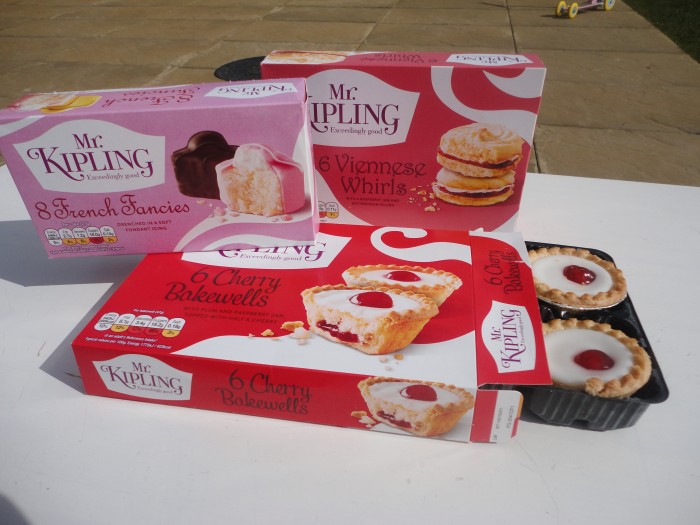 The weather is turning for the better and we have started to make the best out of it by enjoying our gorgeous outdoors and spending more time in our garden.

Easter Monday was incredibly sunny and warm, we could not have chosen a better day for a little treat (or two) outside in the sun. 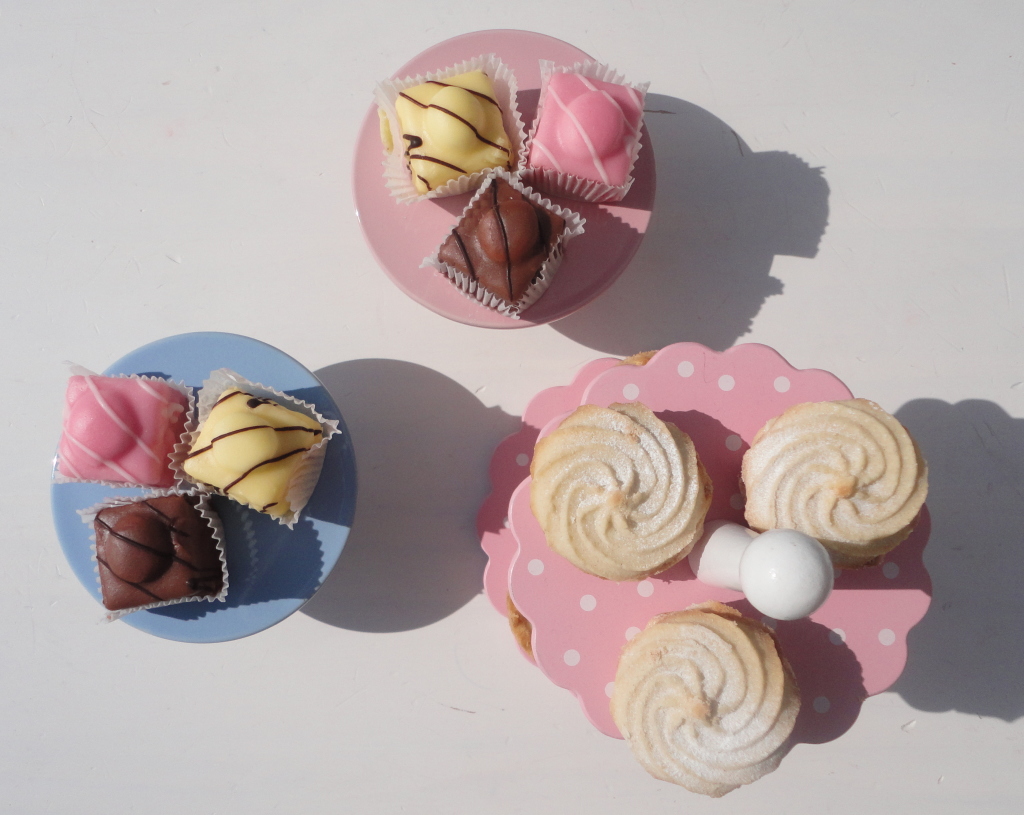 We moved the kids’ table and chairs outside, Bee invited her best friend over and all together (mummy and granny too!) we enjoyed some yummy cake.

For once I didn’t bake but took some yummy Kipling cakes out of the cabinet and laid them on pretty cake stands. 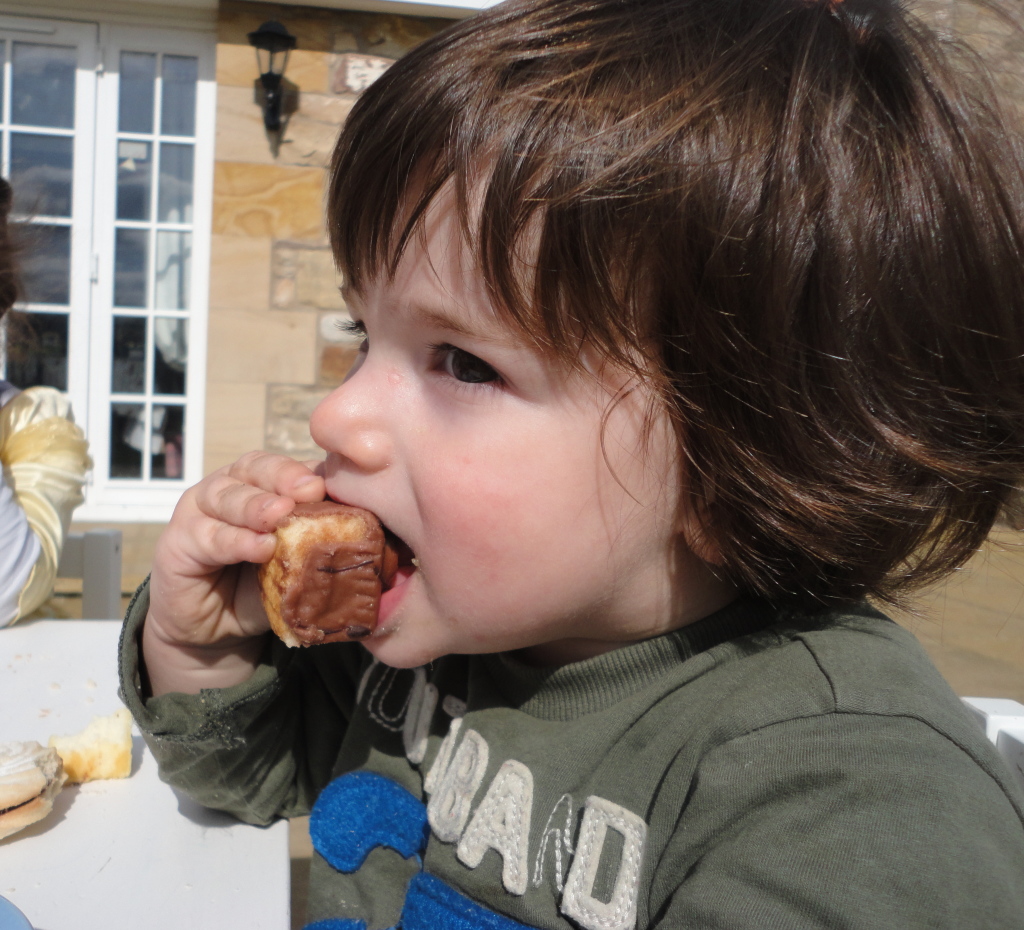 I had troubles keeping the kids away from these delicious cakes while I was setting them on the cake stand.

We had Cherry Bakewells, French Fancies and Viennese Whirls. 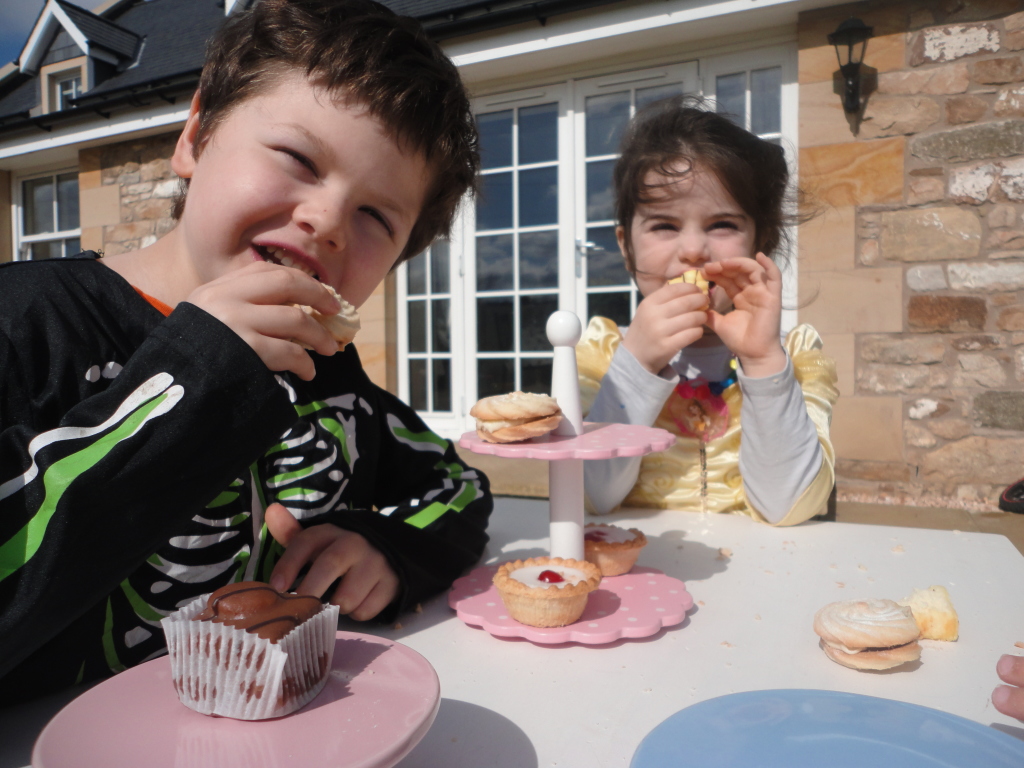 These pretty colourful little cakes made the afternoon snack a delicious break. 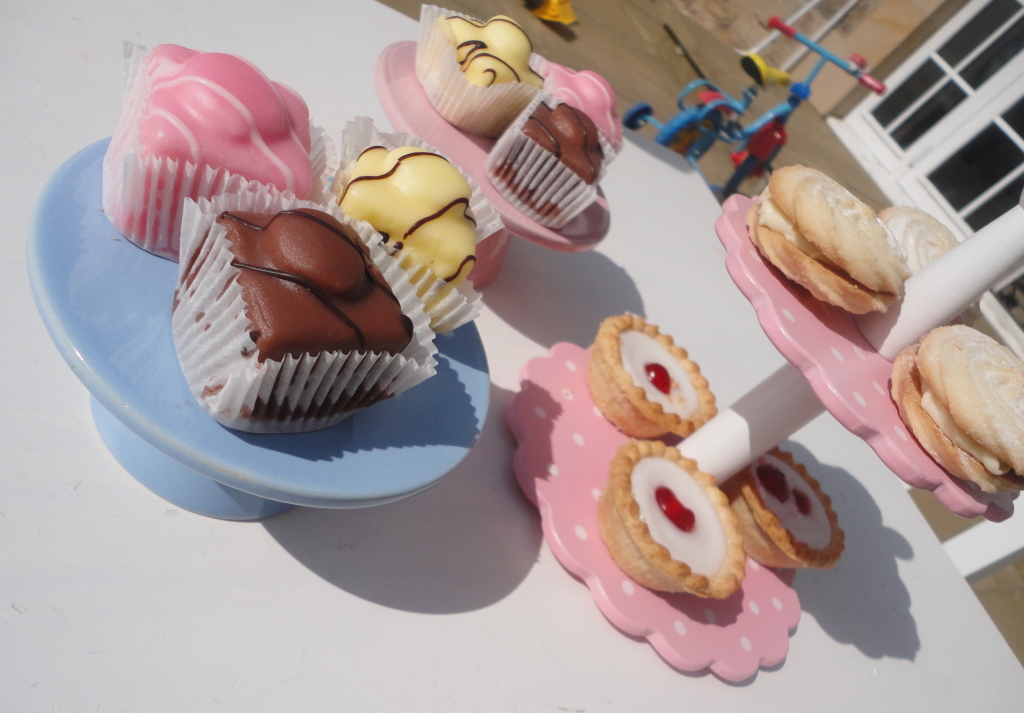 After having played for hours the kids were hungry and clearly delighted to be in for such a treat.

Plus they could not believe mummy was allowing them to eat so much cake! 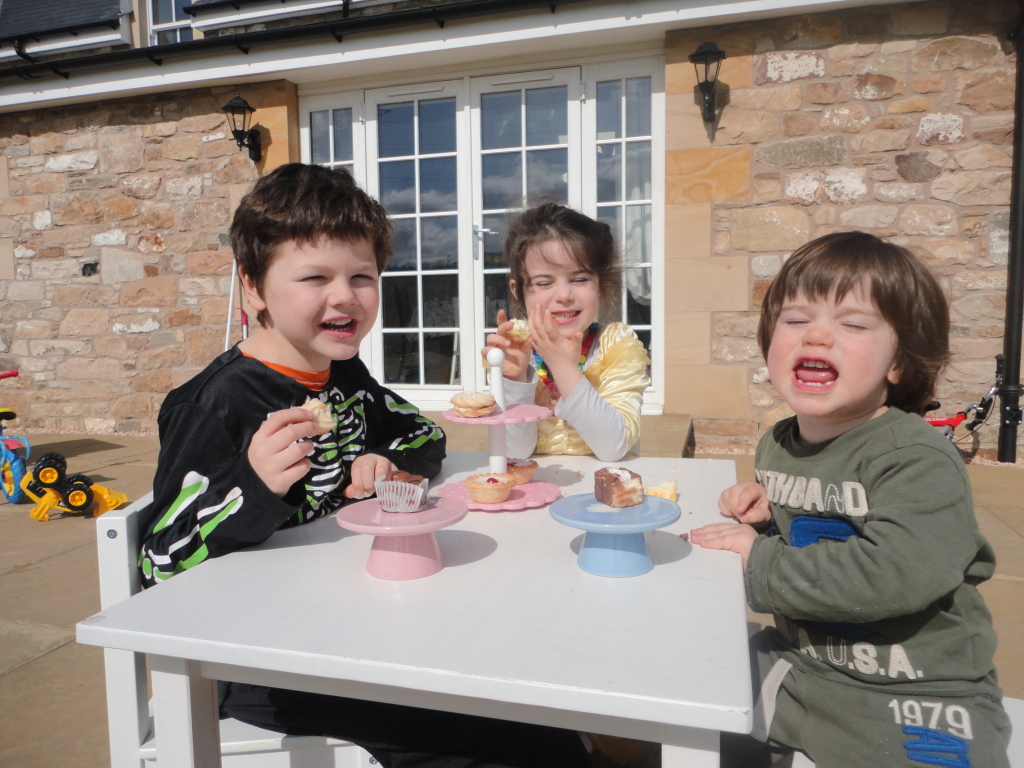 Look at their faces! Sooo happy! 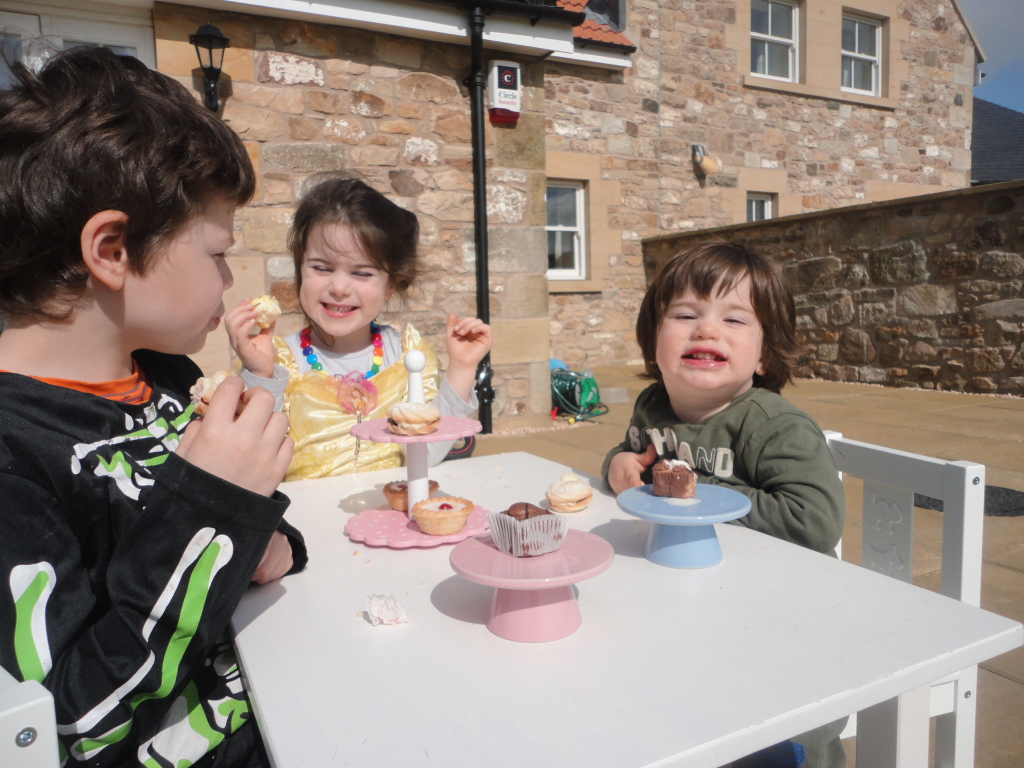 What a brilliant afternoon we had and  I enjoyed the cake to the fullest as for once I didn’t spend time baking it!

*This post is an entry for #betterwithcake Linky challenge,  by Mr Kipling. Learn more over on the Mr Kipling facebook page! 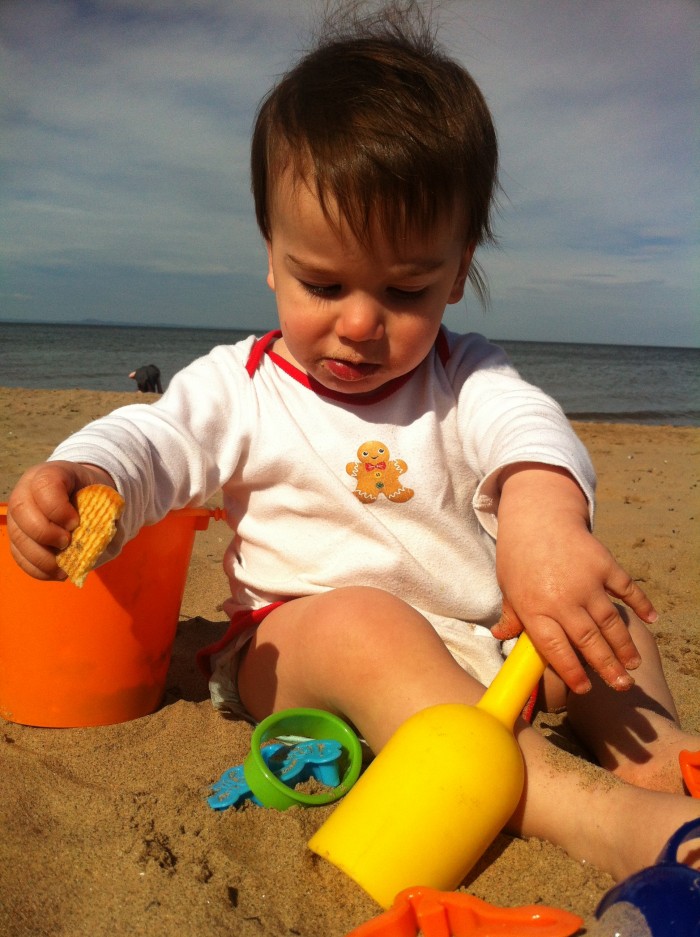 “Winter’s a good time to stay in and cuddle, But put me in summer and I’ll be a — happy snowman!” Olaf would have loooved this summery day in Scotland!!

We knew it was going to be a lovely sunny one so rather than going to the Botanic garden we opted for a walk on the beach which is literally 5 minutes by car from our flat. What I never expected is that it was so warm that a stroll on the beach turned out to be an afternoon of fun playing in the sand and getting into the sea!

When we arrived we straight away took our shoes and socks off. This was Leonardo second time on the beach so I let him sit on the sand and getting used to it.  It clearly didn’t take him much time to figure out that the texture was a very interesting one so he quickly grabbed some sand and started eating it! I thought once he tasted it he’d have spit it.. nope, he was loving it! Yuck!

We OBVIOUSLY forgot his hat! Lucky my mom had a little handkerchief so we tied all 4 corners and used it to protect Leonardo’s head.. he looked pretty funny! 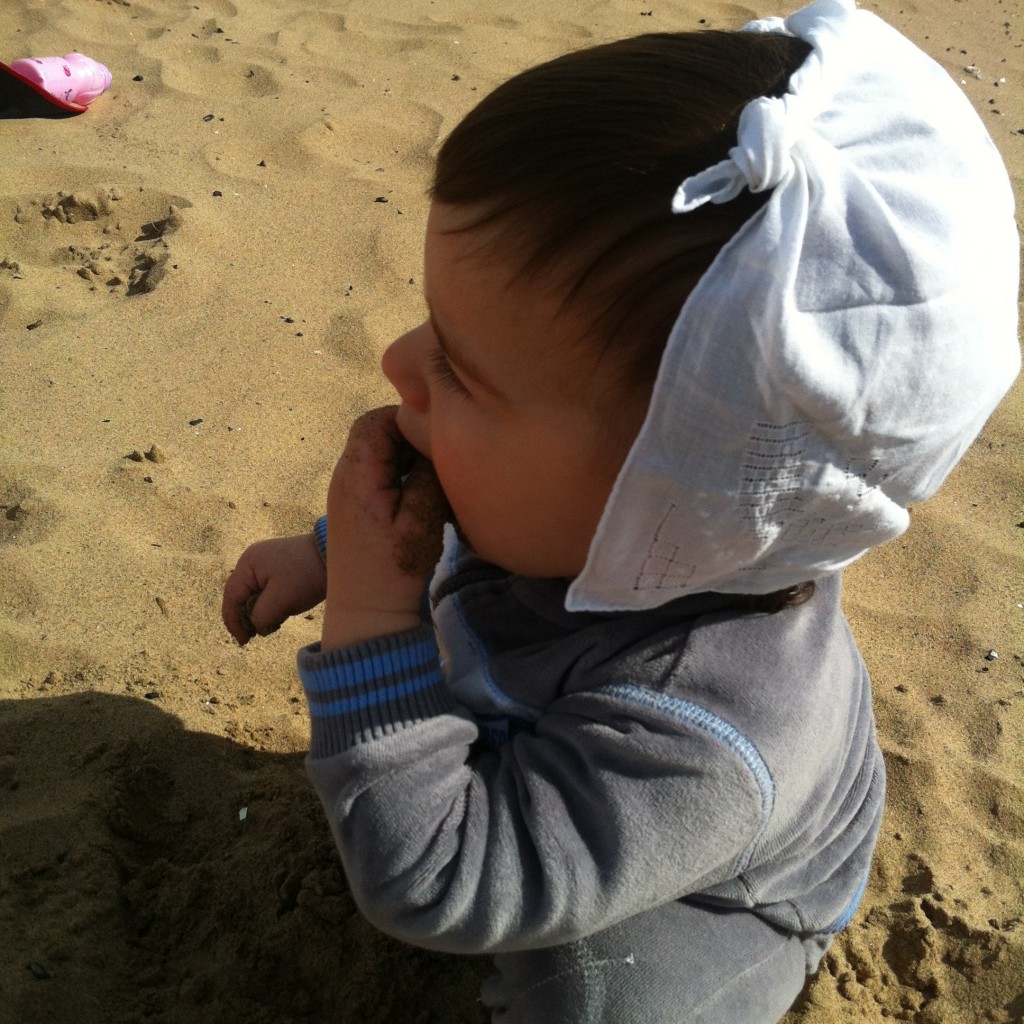 As the time went on, we were really getting hot so I decided to take his tracksuit bottoms off and go for a walk closer to the sea. As soon as I put his feet into the water I struggled to keep him away from it! He kept going back and even threw a massive tantrum when I grabbed him a second before he jumped face down into the sea!

As soon as we arrived Bee was already making a sand castle. 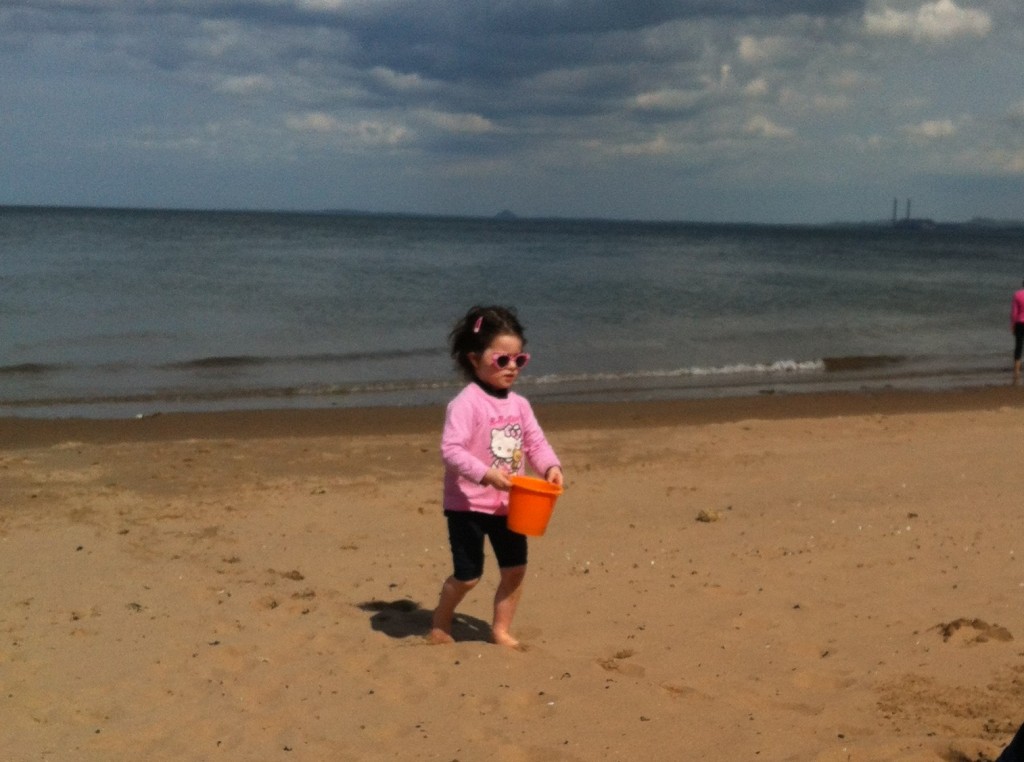 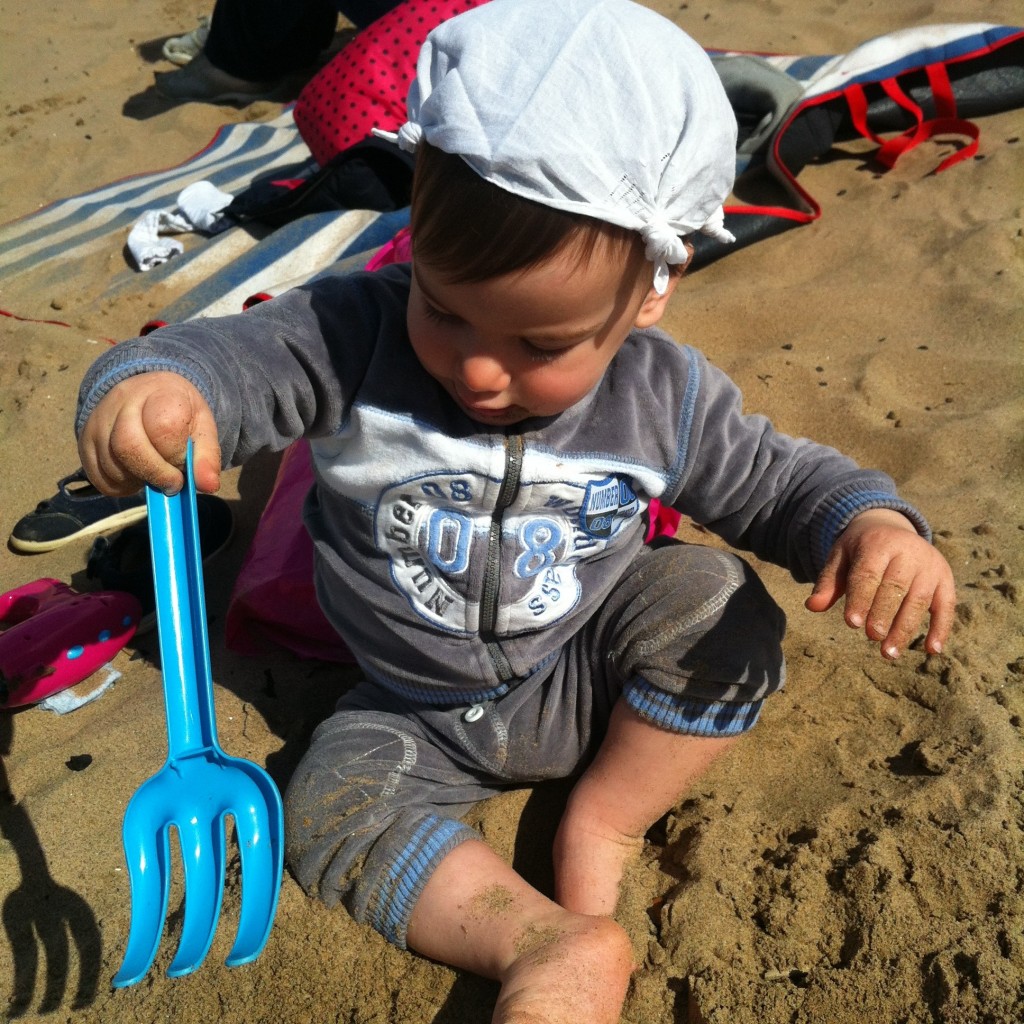 I love this picture! Both look busy running around the beach. Bee at this point had all her clothes wet and I didn’t have any change for her (to be honest I’ve never expected it’d have been so hot to the point to walk into the sea!)  so she was just wearing the sleevless top which was the only dry garment we had at that point! Nonna could not quite believe that we were so lucky to spend such a lovely warm day at the beach in May! 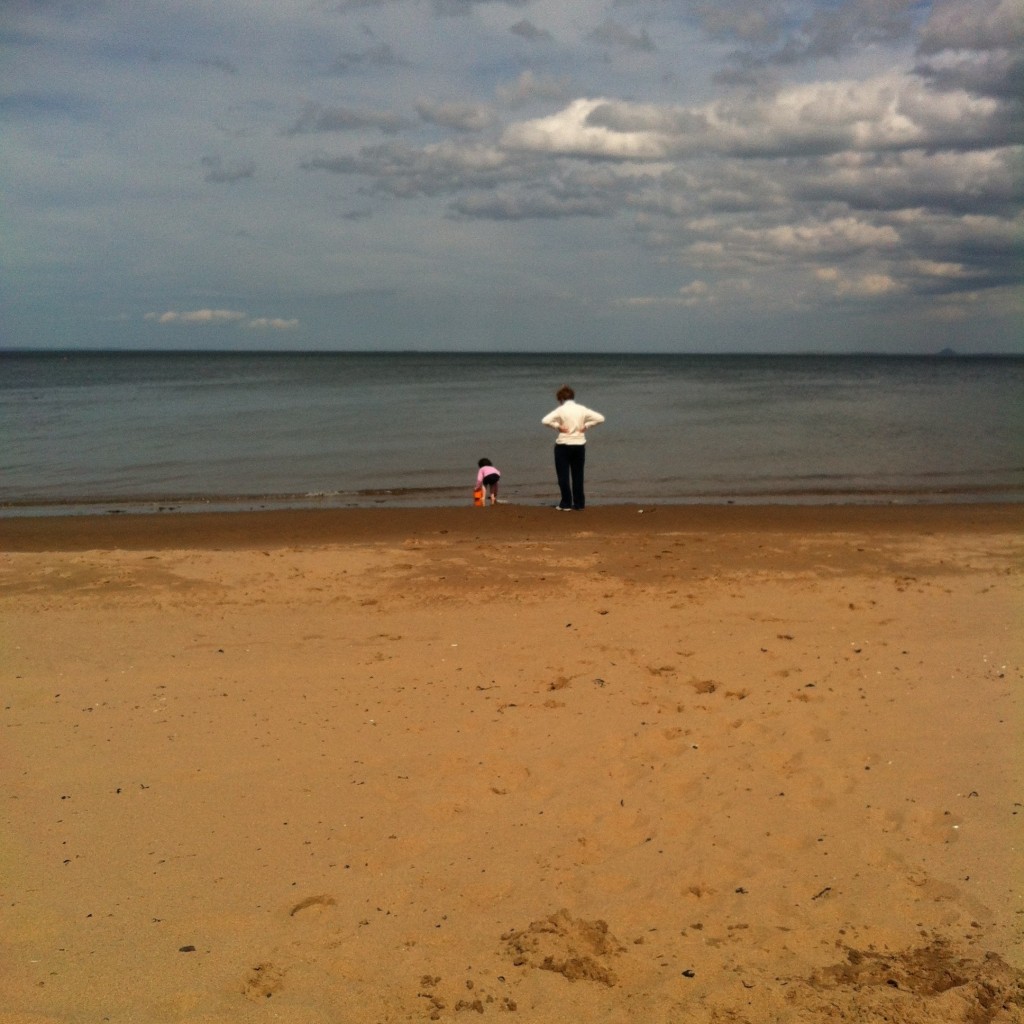 Stopping Leonardo from running into the water kept me fit for a couple of hours. 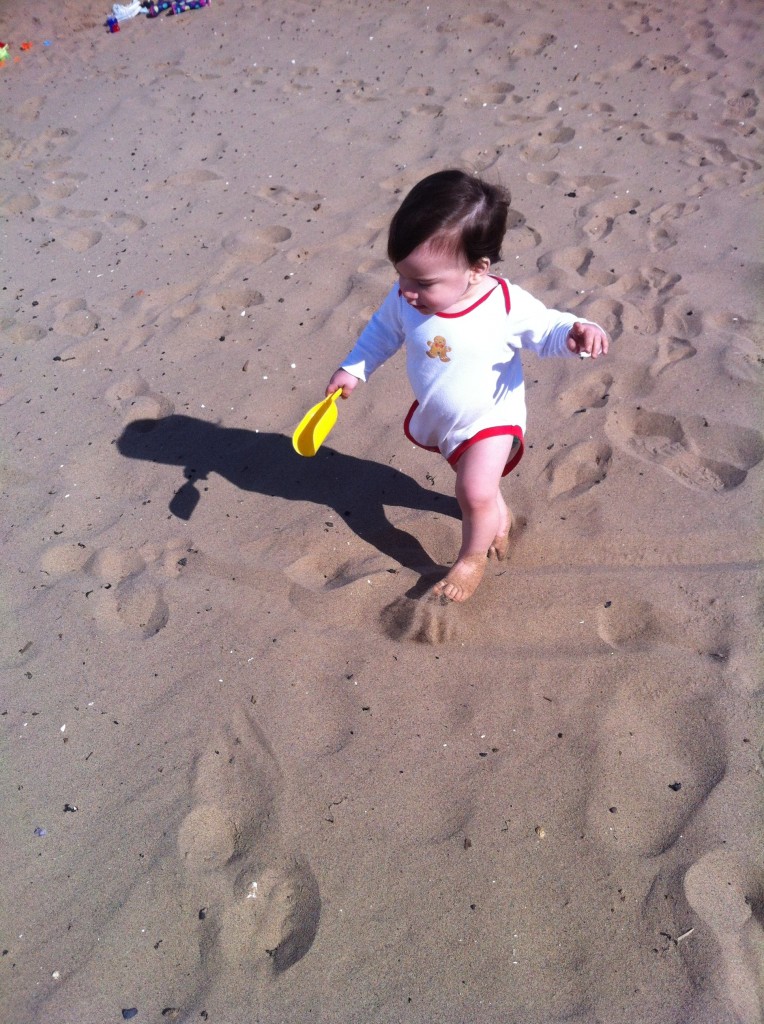 Bee went a bit further into the sea to fetch some water for her castle. If she had a swimming suit she would have definitely jumped in! 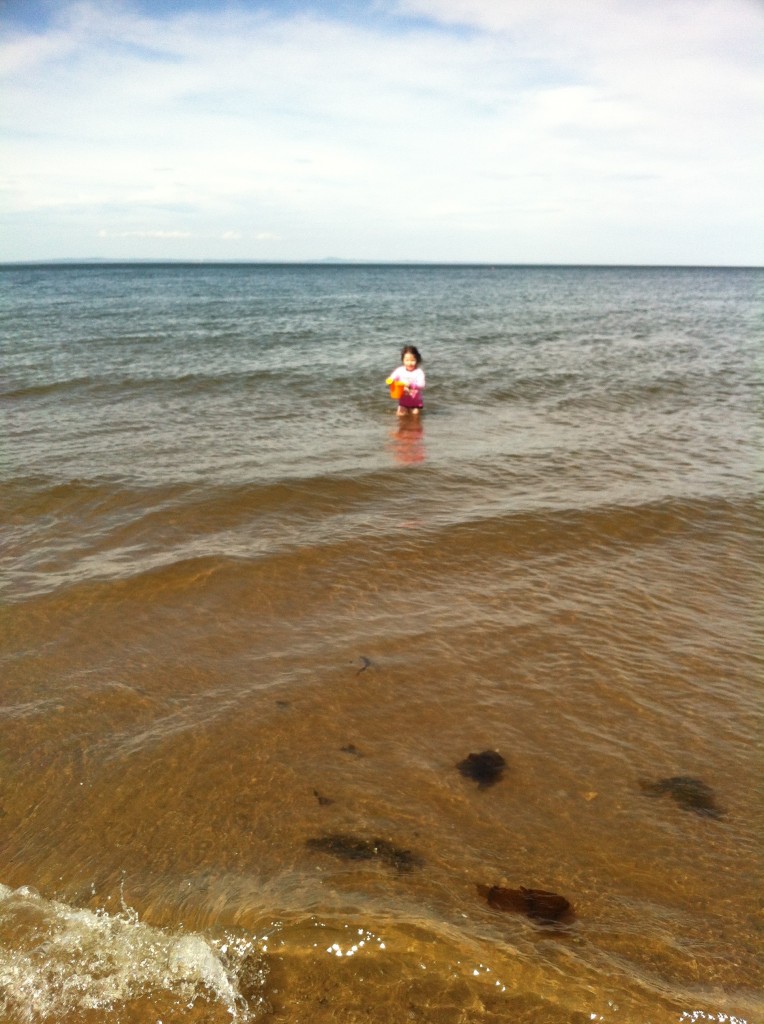 We spent an amazing day at the beach playing with the sand, with the water, watching many dogs jumping into the sea and chasing each others.

It is only sad to think that this could have been our only day of summer (yeah funny Scotland!) but at least we enjoyed it to the fullest! 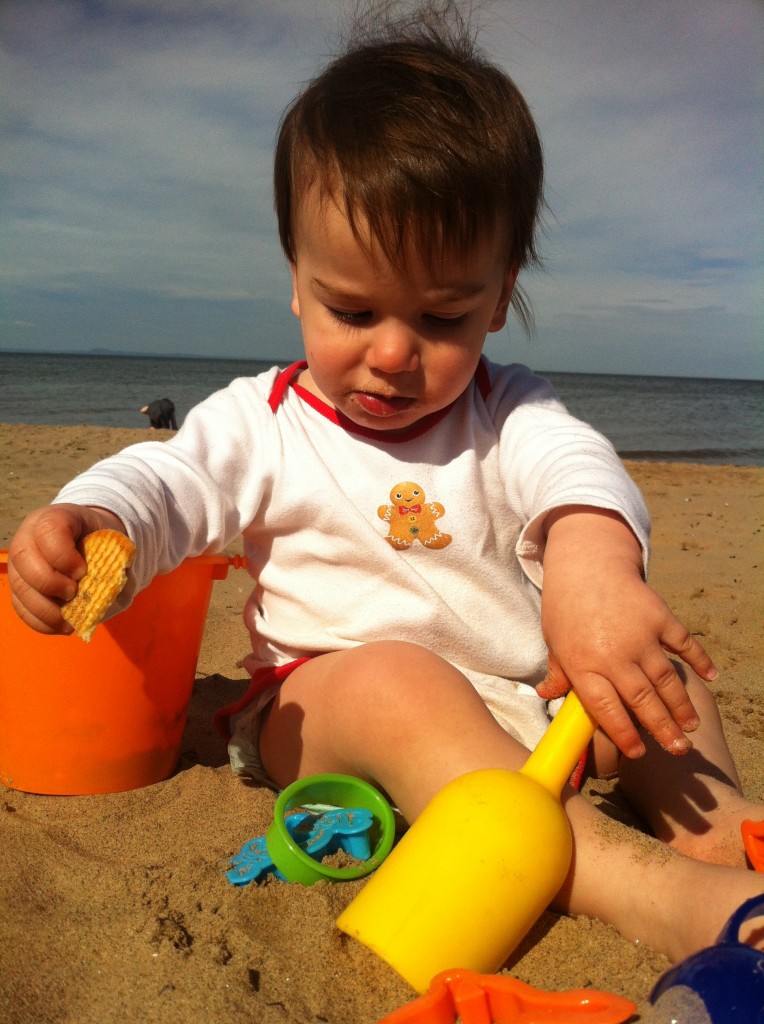